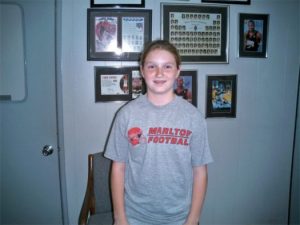 Megan began treatment at this office in January of 2007. She was complaining of left foot pain, occurring everyday that had not gone away for the past three years.

She was seen by three different doctors including Children’s Hospital with no relief. Unfortunately, she was told she had to stop playing soccer and other sports.

After only a couple of weeks of treatment, including foot adjustments, Fenzian and Cold Laser her foot pain was gone and she was able to resume all sports, with no pain.

What I found really interesting on examination was a nerve pinched in the upper back that affects the lungs. Megan has had Asthma and frequently uses an inhaler while playing sports. Since being under chiropractic care, she has not had to use her inhaler.