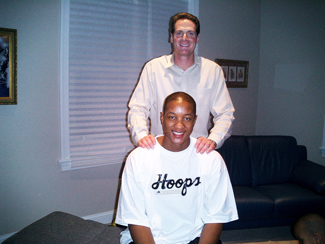 Through my 15 years as the chiropractor for the Philadelphia 76ers I have had the opportunity to work with many athletes. I must say it has been honor and privilege to work with Eric S.

He is not only an advocate of chiropractic but understands the meaning of remaining healthy through chiropractic care. He was one of the only players to remain injury free through the last two seasons. When asked by the Philadelphia Inquirer New paper how do you stay healthy, he said I go to my chiropractor. He even allowed one of my treatments to be televised on national television before a playoff game.

Unfortunately as in all professional sports players are traded. Last week Eric was traded to the Cleveland Cavaliers. I wish him much success in his new city and know he will be sorely missed here.