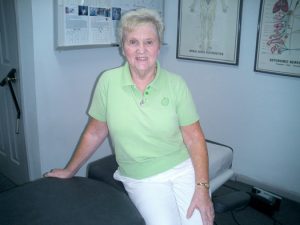 Mrs. T. began treatment at this office May, 2007 suffering from the effects of a difficult condition called Chronic Imflammatory Demylenating Polyneuropathy that was diagnosed in 2005. Her initial complaints included pain and severe pain in her back, numbness in her arms, legs, ankles and thumbs.

The pain made walking difficult and sometimes she had to use a cane. She was seen by two different neurologists, hospitalized for a week, and had multiple MRIs, a nerve biopsy, spinal tap, EMG and physical therapy. Nothing was significantly helping her condition and she continued to worsen.

She was referred to this office to try Chiropractic care with Fenzian treatments. Her response was quite amazing. The pain and numbness significantly decreased and she was able to get back to her old self. Last week she even power-walked two miles in 30 minutes! On her vacation she played tennis for the first time in years! Never give up on your body’s ability to heal itself.