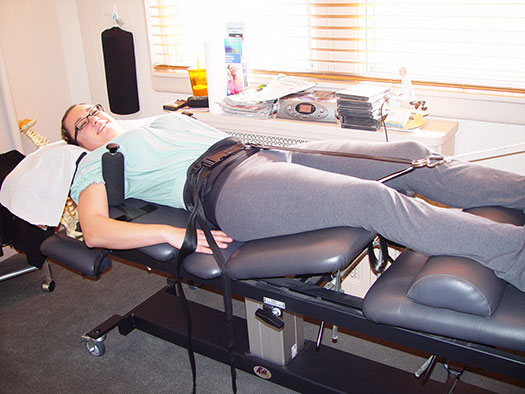 Melissa K. is an accomplished equestrian. Her first riding experience was in a papoose! She rides nearly every day. And she’s really good. She has shown in competitions from New York to South Carolina, with many wins. But suddenly one day, pain in her low back literally stopped her in her tracks. The pain was severe and shot down her leg, leaving her foot almost completely numb. She had difficulty walking, sleeping, standing, even driving.

She was unable to ride horses at all. An MRI revealed a large disc herniation that was pressing on a nerve in her low back. The orthopedic surgeon told her she needed a series of three epidural shots, and if that didn’t help, she would need surgery. Melissa chose to begin treatment in our office. That was on July 26th of this year. We treated her with spinal decompression therapy of the lumbar spine, chiropractic adjustments, the cold laser to stimulate healing, and the Interex to reduce nerve pain.

Melissa was highly committed to her treatments. She knew it was going to be a process and she wasn’t going to be able to ride for six to eight weeks. But she believed the care she was receiving form Dr. Liebman and his team was all that she needed. And she was right! Melissa has been pain-free for over a month now! She’s back to riding six days a week and took two first place ribbons in her last competition. Melissa has just one thing to say: “Trust your chiropractor!” Congratulations Melissa!