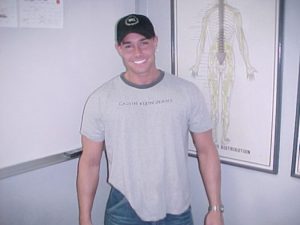 We are starting the New Year with a special patient, Jim. Jim was involved in a very serious car accident that resulted in 3 fractured bones in his neck on July 26, 2001.

When I got the frantic call from his mother, the day after the accident, asking if I was able to help his neck. I explained to them that after an injury of such severity a hard neck brace was going to be needed to be worn for 2-3 months and specialists including an Orthopedic surgeon and a Neurologist would be needed.

Working as a team was very important. I also explained about a seminar I had recently taken on the Cold Laser that helped speed healing of bone and soft tissues. Working with the muscles and other soft tissues even with him in the hard collar was important in restoring full motion of his neck, when he came out of the collar.

It is now 5 months after the accident and Jim is back to work full time and has complete movement back in his neck. A follow up CAT scan even showed no evidence of one of the fractures. The confidence they had in me was one of my greatest compliments.