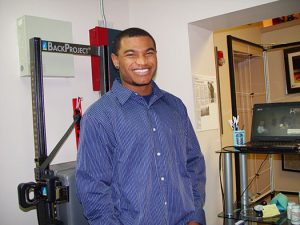 Landras L. is an elite athlete. His sports are track, football, and basketball, and he’s good at all of them. He is currently a sophomore at Amherst College where he attends on an academic scholarship.

Landras, had it all-until late April of his freshman year, while conditioning for track, he began experiencing groin pain. It seemed to improve and he made it through the school year. But in June 2010, the pain came back with a vengeance. It was not getting any better. He had only one month before he had to be back at school for football season.

Landras began treating at this office in July of 2010. He experienced relief after his first treatment. He was treated with chiropractic adjustments, pulsed magnetic generator for pain and inflammation and the Interex for nerve pain.

After only three treatments, Landras was doing so well that we introduced Active Therapeutic Movement exercises to strengthen his muscle while in a pain free state. He had a total of 10 treatments.

And the result? He won the Jeff Award in football that season for the most accomplishments on defense and special teams. Landras came back during his holiday break from school for a “maintenance treatment” still feeling great. He’s getting ready to start basketball season.

“Thanks Dr. Neil for getting me back on track. If I shoot for the stars and miss, I’ll still land on the clouds”.