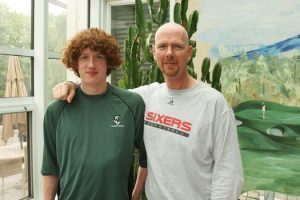 When Brian called me and told me he was traveling 34 hours from Winnipeg Canada and staying 2 weeks for treatment at my office, I was honored. He explained that his son Will had a nerve problem in his leg that was not going away. This nerve problem affected his walking, running and ability to play basketball since childhood. He saw numerous doctors in Canada which did not help his condition.

He heard about our office from 76er Todd M. and decided to use his vacation time and take the trip. Although it was only a short time, at the end of the 2 weeks, Brain told me it was the best he has seen his son walk since he was 11 years old.

I appreciate the confidence that Todd and Brian have in our office and their appreciation for the new and different technology that we utilize.