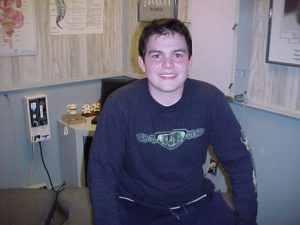 When Rich started treating at this office on 2/26/02, he was having headaches that were so severe it started changing his entire life. At first he was unable to participate in athletic activities including basketball, martial arts and even riding his bike.

The pain became so debilitating that in January of this year he had to stop attending school and was placed on home schooling. Advanced imaging including a CAT scan, pediatrician evaluation, and even a visit to Children’s Hospital gave no answers except trying different medications. He was referred to this office as a last chance, by a friend to see if Chiropractic could help his problem.

The first thing I did was take an x-ray of his neck which revealed misalignments of the cervical vertebrae. These misalignments of the cervical spine could cause a variety of different problems including headaches, even of this magnitude. I am pleased to report that after only eight weeks, Rich is riding his bike again, playing basketball, participating in karate and yes, even back to school.