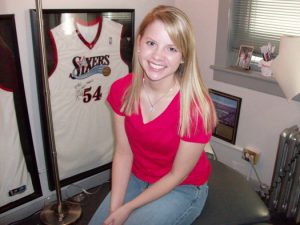 When Rebecca started treatment at this office in February of 2009, her complaints were very different from the average high school student. Unfortunately, she has been suffering with ongoing pain, sometimes so severe that her life has become difficult for the past two years. As her pain continued to worsen, she was unable to attend school and was eventually home schooled.

Besides the pain she was having in her body, particularly her legs, she was also experiencing constant nausea and intermittent gastroparesis (i.e.stomach problems). She had seen many doctors, and even tried acupuncture and hyperbaric chambers, but nothing was helping.

When she began treatment in February, she was very nervous about treating with a Chiropractor and never had chiropractic care. She and her parents heard we were using a device called a Fenzian unit which might help her pain. It did not happen right away but over the first couple of months her pain started to diminish. She was very excited about her improvement and continued to make strides. At this time she is off all pain medication and feels great! She is thrilled that she has returned to High School is getting ready to attend college and fulfill her dream as a Culinary Chef..