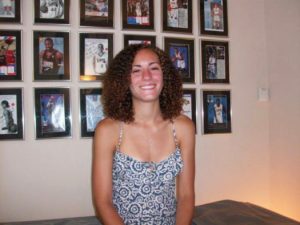 Robin E. is an exceptional student. She maintains close to a 4.0 at Rutgers University where she is majoring in economics with a minor in math. If that’s not enough, she’s also a gifted competition runner. But in 2008, a pinched nerve in her low back causing low back pain stopped her in her tracks. She experienced no relief after seeing several different doctors. Her running coach felt her running form and her posture were partly to blame and referred her to our office.

Regular chiropractic adjustments and the use of a Fenzian unit eased Robin’s low back pain and made breathing easier. Her posture improved as did her running form. How did this affect her running? Robin holds six school records for indoor running and five records for an outdoor running. She also holds records for both the 5K and 6K cross country races. She is a two-time academic All-American in cross country and all region for girls cross country.

Robin is determined to continue competing at high levels. She treats regularly at our office, adding Active Therapeutic Exercises to her treatment regimen. She modestly claims, “Without Dr. Neil I am not sure I would have all of these running accomplishments!” But the real credit goes to Robin herself. Congratulations on all of your achievements Robin!