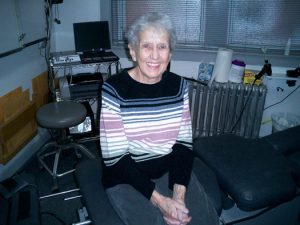 When Mrs. B. entered this office in November of 2007, she had recently fallen off of a chair causing debilitating low back pain and sciatica, which is pain down the leg. After having x-rays and MRI’s, no fractures were found but her pain continued to get worse.

The pain became so severe walking was becoming difficult. She was very skeptical about chiropractic care but was convinced to treat at my office by her daughter. Her concerns were about her bones being too brittle and treatment would be too rough.

After educating her about the advanced techniques we use including a low force flexion distraction table, Fenzian Unit and Cold Laser she was excited to begin treatment. After only a couple of weeks she was pain free and smiling again!