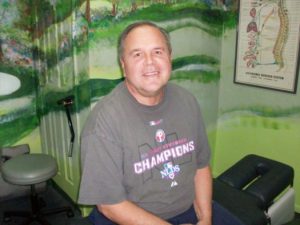 It all started on November 6th, 2009, a day that changed John K.’s life forever. That was the day he had his first appointment at our office. The sciatic nerve pain he was experiencing had gotten so bad that he was unable to play golf or stand up for more than an hour at a time.

John was seen at our office 3 times a week for 3 weeks. He couldn’t believe that by then, he was able to hit golf balls with no pain. He was even able to shovel snow in one of the worst winters we’ve had in a long time. But John didn’t stop there. He realized that chiropractic is not just about pain relief; it’s also about overall health and wellness, enabling the body to function at an optimal level. So he was inspired.

He lost 15 pounds. He stopped smoking. He began a vitamin/supplement regimen consisting of essentials such as omega 3 fish oil and glucosamine. He ordered Foot Levelers to stabilize his pelvis and help him with his balance.

And now? His body works better than ever. In fact, John no longer needs to take a medication he had been taking for 11 years. John admits, “You have to take care of yourself. I have young grandkids and I want to hang out for a while. I don’t want to be a ‘geezer’ yet.” Now that’s how you do it. Congratulations John!