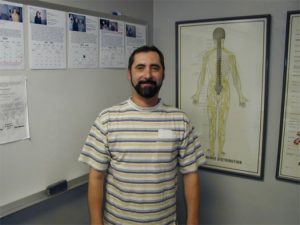 When Michael entered this office on April 4, 2004, he had been suffering with severe pain and numbness in both his right and left feet, for the last 4 years. His pain effected the shoes he could wear, activities he could perform and his sleep.

Initially he tried a podiatrist who gave him orthotics for his shoes. He then sought treatment with an orthopedic surgeon who gave him 10 injections in his feet and back. An acupuncturist also was of no help. His pain was so severe, he was placed on Darvocet and Nuerotin, which he needed to take everyday.

He complained that his pain got so bad that he sometimes felt like cutting his feet off. After only 3 treatments at this office, Mike started to feel some changes in his feet. It is now 6 weeks after his first visit, and Mike is off of all of his pain medication for the first time in 4 years!

Besides adjusting Mike’s feet, I also adjusted his low back and used a Cold Laser to help healing.