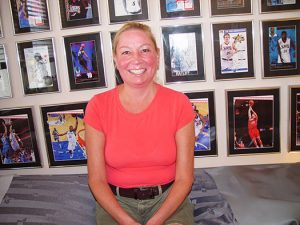 Pain of the low back and feet caused Linda M.’s life as she knew it to change dramatically. She was in extreme pain that traveled into both of her feet. The pain was so severe she had to stop working. She could not even put shoes on. If she sat or stood for a prolonged period of time, she became unable to move and would have to lie down. Linda tried epidurals, but they did not help. Neither did acupuncture. Pain killers only helped a little.

She traveled to the University of Pennsylvania and to the Cleveland Clinic. The doctors wanted to do surgery but none of them could give her any guarantees that it would be successful. That was not an option for Linda, an intelligent, educated businesswoman who did her research. Instead, she began regular chiropractic treatments in our office. She couldn’t believe the results. She began improving almost immediately and was able to function again. She was able to go back to work, start exercising again, and putting shoes on was no longer a challenge!

Linda admits she still gets pain on occasion; when it happens, she’s back in our office for a few treatments and is as good as new. Linda’s philosophy? “Avoid surgery and pain killers. Stick to the treatment plan. It’s not an overnight fix. But it works.” Congratulations Linda!