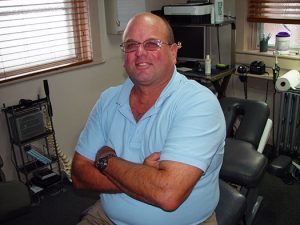 When James T. came to our office last May, he had just been through a year of severe pain in his right knee. He was only able to climb steps one at a time. He could no longer mow his lawn. He was unable to walk long distances. But the worst for James was driving a car. He called it “agony”. He found himself using the cruise control often.

His orthopedic surgeon told him he needed a knee replacement. We recommended a course of treatment using the pulsed magnetic generator, chiropractic adjustments including adjustments of the knee, a cold laser and the Interex for decreasing nerve pain.

James admits being very skeptical at first, but he was encouraged by a friend who is also a patient of ours. He figured, “What do I have to lose?” And it certainly worked out. He is now able to climb steps, drive without pain, mow the lawn and even ride his bike! His progress was so impressive that at his last appointment, his orthopedic surgeon told him to hold off on surgery because of the improvements he’s made. Congratulations James!