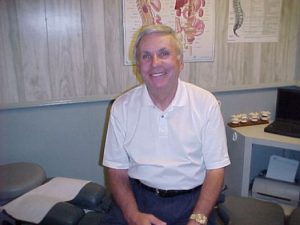 Stanley S. has been a patient at this office for many years, almost since I opened 14 years ago. When he initially entered this office, he was not able to play tennis or golf because of right shoulder pain. He was told surgery would be needed to correct a rotator cuff problem and not to play tennis or golf until the surgery was performed, because activity would make the condition worse. After only a few short weeks he was doing great! It has now been 14 years and his shoulder is still doing great. Surgery was never needed. Fixing his shoulder was more important than I ever realized. He was one of my patients who referred in Harold Katz, who at the time owned the 76ers, with the same shoulder problems.

Besides shoulder problems, Stanley also had a history of back problems requiring injections in his low back since the age of 20. Since being under care at this office he has not needed any injections.

I wish Stanley good luck in the finals of his Country Club Singles Tennis Tournament this month.