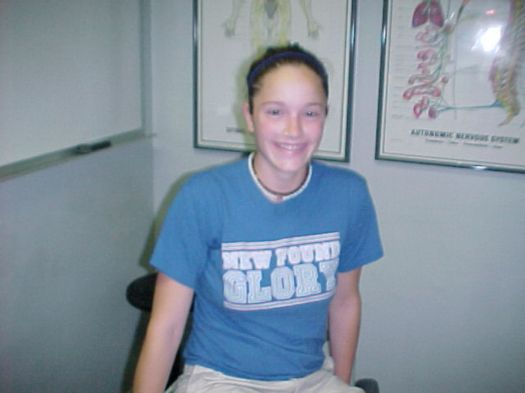 When Randi initially began treatment at this office, one year ago, her life was much different than it is now. Initially she entered the office complaining of pain and intermittent extreme pain in her low back that was radiating down into both the right and left legs.

Her daily activities were limited including softball and soccer. Her initial pain began four years ago after playing soccer and injuring her low back. Her pain progressively got worse and after a second soccer injury in September of 2000 the pain became extreme. She visited her family doctor and was then sent to an orthopedic specialist at University of Pennsylvania.

An MRI of her low back revealed two herniated discs, one which was pinching a nerve. She was placed on Celebrex for her pain which was not helping. She was told surgery would be needed to correct the herniated discs in her lumbar spine.

Randi’s parents asked the doctors at University of Pennsylvania if chiropractic care could help her problem. They adamantly told her it was much too dangerous for her to have any chiropractic care because of the severity of the disk problems.

Her parents had to make a tough decision, listening to me, who told her that I would try to help, or listening to the medical doctors knowing surgery would be a final result.

I’m pleased to report at this time that Randi’s a healthy 16-year-old girl participating in all sports with pain free. I also appreciate Randy and her parents confidence in me because I know it is difficult to go against what is medically recommended.