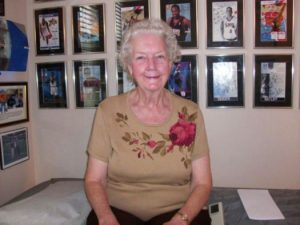 Jane M.’s quality of life was deteriorating. For over a year she experienced severe pain in the left hip, radiating down to the left leg. The pain was so severe she could no longer sleep in her bed; she had to sleep in a recliner. She couldn’t clean her house. She couldn’t prepare meals. Sometimes the pain was so bad she couldn’t eat. She began to get depressed and cry often. She wondered if this was how she was going to spend her retirement years—-in constant pain.

But Jane didn’t just sit back and do nothing. She actively sought treatment for her condition. An MRI revealed five disc bulges in her lumbar spine. She saw a pain management specialist and was given 3 epidurals and even had a convulsion as a complication. She was told she had no choice but to have surgery. She adamantly refused and began treating with a chiropractor. No relief. Two more chiropractors, still no relief. Jane was becoming more discouraged. She was referred to our office in January of this year, and after reviewing her MRI a course of spinal decompression along with cold laser and Interex therapy was initiated.

The treatment was far different from any of the other doctors she had previously visited. After only four weeks, Jane was able to sleep in her bed at least half of the night. In a couple of more weeks, Jane was completely pain free and was back in her bed with her husband. “It was a miracle” according to Jane. She had her life back. “No one should ever have to suffer like I did. Dr. Neil and his staff are miracle workers.”